A lively BEN meeting was held last Saturday (March 4, 2017) at “Smart Academia” premises of Jamaica in New York. Presided over by Dr. Ziauddin Ahnmed, Professor of Dexrel University, and a BEN leader, the meeting had three parts.

The first part focused on the BAPA-BEN conference on “SDGs and Bangladesh Environment” (SCSDGE) held in Dhaka on January 14-15. Dr. Nazrul Islam, Global Coordinator of BEN, explained the context of the conference and its chief achievement. Prof. Khalequzzaman of Lock Haven University then made a presentation on the conference using a ppt file. Razia Nazmi presented the resolution adopted at the conference.
The second part was devoted to launching the recently published volume of the BAPA-BEN Special Conference on Coastal and Marine Environment of Bangladesh (SCCMEB) held in Dhaka, Bangladesh in January 2016. Mohammad Fazlur Rahman, the editor of the weekly Thikana, published from New York City, offered his comments on the book. In his comments, Mr. Rahman observed the richness of the volume and urged all to read and make use of the volume.
In the third part, two recent books on rivers, written by BEN leaders, were launched. These are “Let the Delta Be a Delta — Way to Protect Bangladesh Rivers,” by Dr. Nazrul Islam, and  উজানে বাঁধ এবং বাংলাদেশের ভবিষ্যৎ, by Prof. Khalequzzaman. The authors acquainted the audience briefly with the content of the books. Members of the audience appreciated the authors’ efforts and thought that the books should be read widely and discussed.
The meeting was conducted by Syed Fazlur Rahman, Coordinator of BEN NY-NJ-CT chapter, and it was attended by among others Anwar Kabir, Belal Beg, Subrata Biswas, Dr. Faruque Zaman, Razia Nazmi, Dr. Afsarudding Ahmed, Dr. Mushfique Chowdhury, Dr. Fatema Ahmed, Zakir Hossain, Nira Quadri, Sharaf Sarkar, Engr. Imdadul Islam, Sayed Nazmi, Mizanur Rahman, Fahim Rezanur, Morshed Alam, and others.  Many of them participated in the discussion, including Nira Quadri, Subrata Biswas, Engr. Imdadul Islam, and Morshed Alam.  In recognition of their special contribution, copies of the SCCMEB volume were presented to Razia Nazmi and Morshed Alam.
The meeting also had a display of BAPA-BEN publications.
Concluding the meeting, Dr. Ziauddin Ahmed narrated his own experience from attending the SCSDGE. He said that he was impressed by the participation of the youth in the conference. He urged all to take guidance from the books that BEN leaders have written, and called upon all to support BEN activities and participate in the struggle to save Bangladesh environment. 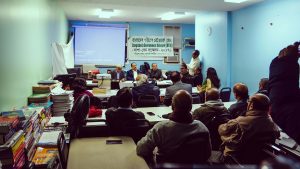 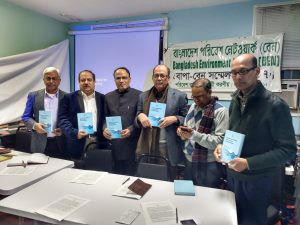